Thanks Judy & Johnny, yes, I noticed Dyersville is in Iowa as I was looking around at photos. Isn't that where Mary Anne comes from?
Follow Remembering Doris Day: https://twitter.com/DayRemembering
Top 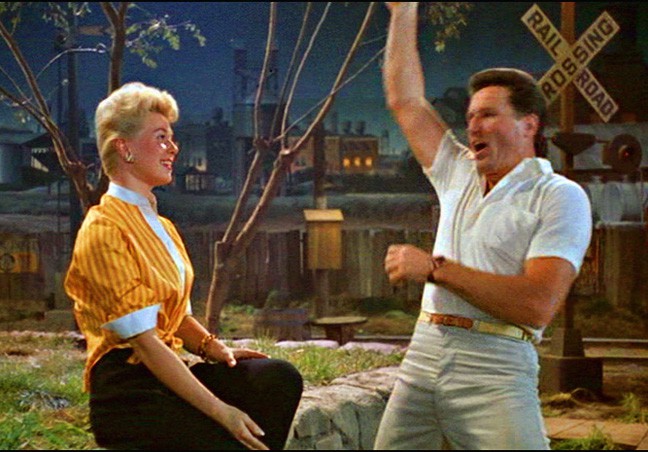 Watch or download - ask me i you need help.

In David Kaufman's book chapter 17 , "I'm Not at All in Love", on The Pajama starts with:
"After her departure from Warner Brothers Day quickly established herself as one of the finest screen actresses of her generation. However, it seems fitting that she did return to her home studio to make one of her best musical films.
Based on a smash Broadway hit that opened at the St. James Theater on May 13, 1954, The Pajama Game provided Day with a role that might have been written for her. While her last three characters-- Ruth Sitting, in Live Me or Leave Me, Jo McKenna in The Man Who Knew Too Much, and the title character in Julie had each emphasized Day's vulnerable qualities, her Babe Williams in The Pajama Game revealed her hard and fiercely independent side. A working woman, Babe will not even permit her budding romance with a factory foreman to get in the way of her proto-feminist principles -- or her job. Though it may be oversimplifying the analogy, Day could be as outgoing as her mother and as withdrawn as her father--depending on the situation. Moreover , she could draw upon both contrary temperaments at the same time , perhaps, never with such winning effect as in The Pajama Game."

Other notes - A note from Jack Warner's conversation with George Abbot states Abbot's first choice to play opposite Doris was Marlon Brando and his second was Gordon MacRae.


In this chapter columnist Sheila Graham is quoted about the film South Pacific: " It's the first film Doris has ever said , " This I want to do"."There's only one guy she wants to do it woth--Cary Grant, who believe it or not has a good singing voice"
Johnny
Top

Johnny, thank you for sharing these tidbits.

I agree that Babe Williams and Doris Day were a match made in movie heaven. Babe's fierceness, her resolve, her integrity - all of that suited Doris to a tee. Doris was pretty much always the motor that made her movies run. She had a real presence about her that made everyone sit up and take notice.

This is one of her best musicals although at times it feels a bit stagy and confined to me. I wish they'd gone outside more as in the rousing Once A Day Year production number. My other tiny quibble is the decibel level at which Doris and John Raitt sang in There Once Was A Man. It's a bombastic number (as Doris once described it) but they were shouting too much for my taste. I greatly prefer her tender readings of Hey There and The Man Who Invented Love over this or I'm Not At All In Love.

In her autobiography, Doris Day recounted how , as one of only four cast members who hadn't appeared in the Broadway production , it was challenging to fall into the groove of a company that had been playing the show for more than one thousand performances together. She described the experience as trying to find her place in a well+oiled machine."


"Nearly the entire cast was imported from the original Broadway production with the exception of Doris Day as Babe, Barbara Nichols as Poopsie, Jack Shaw as Prez, and Kenneth LeRoy , who took over Peter Gennaro's dance role as Gennaro had been drafted by Jerome Robbins to serve as assistant choreographer on "West Side Story".
Johnny
Top

Users browsing this forum: No registered users and 3 guests