Thanks for that Musiclover.
Top

It is always interesting to read what Doris' co-stars have to say about working with her. James Stewart and Doris Day had great chemistry in The Man Who Too Much.
Johnny
Top

Always so many great photos on here - thank you all so much.
Follow Remembering Doris Day: https://twitter.com/DayRemembering
Top Thanks Peter for these great Doris photos.

The Spanish Romance On The High Seas poster,
the You're My Thrill sheet music and the Ready, Willing and Able sheet music photo from Young At Heart are my favorites from these photos.

I love the detail of the mermaids blowing trumpets on the corners of ROTHS poster. I had not seen this poster before.
Johnny
Top

Thanks musiclover and Puck.
Like Irene Dunne done.
Top

What is Doris looking at? She has her white gloves ready in hand.

All your pictures are fantastic!♥


Opera star Marguerite Piazza visits Doris on the set of "Love Me Or Leave Me". 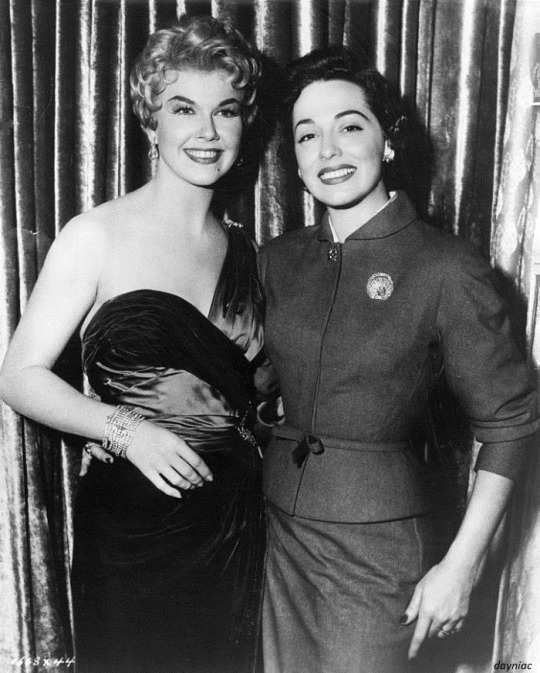 ANOTHER ONE I'VE NEVER SEEN BEFORE:

Thanks for the pics, like the one with John Raitt... hadn't seen that one before. Thank you Howard and Peter for the interesting Doris photos.

Doris looks incredibly sweet in the photo with Frank Sinatra. I wonder who the man is that they are with in the photo.

I have not heard of Royal Cola and did not know Doris was in advertisements that early in her career.

Young Man With A Horn photo to celebrate Kirk Douglas 100th birthday today. I wonder if Doris is giving him a call today.

Thank you so much Peter for all the detailed information on Doris' work on commercials. I had no idea that Doris did this amount of work, I will be sure to follow up on this. Perhaps these commercials never aired on Canada.

Came across some nice photo's: This photo was taken by our Mary Anne, who was working for Doris at the time. She accompanied Doris someplace where there were animals. The woman next to Doris with her hand on her back had just given Doris the pink thing to put over her shoulder. Doris has nice fans doesn't she?

Users browsing this forum: No registered users and 4 guests